The report below on exploring permit areas was done in early September, 1999. Since then, the permit fishery has been getting more attention and there are more of our clients pursuing this greatest of all fly fishing challenges. There has always been the opportunity to get high numbers of shots at tailing and cruising fish on some of the less frequented flats off the coast of Central Belize, but recently the catch results have been increasing. Last year, nine (that we know of) fly fisherman released their first permit during a mothership trip. The four charters between mid-February and mid-March this year recorded 22 hook-ups, an almost unbelievable number. 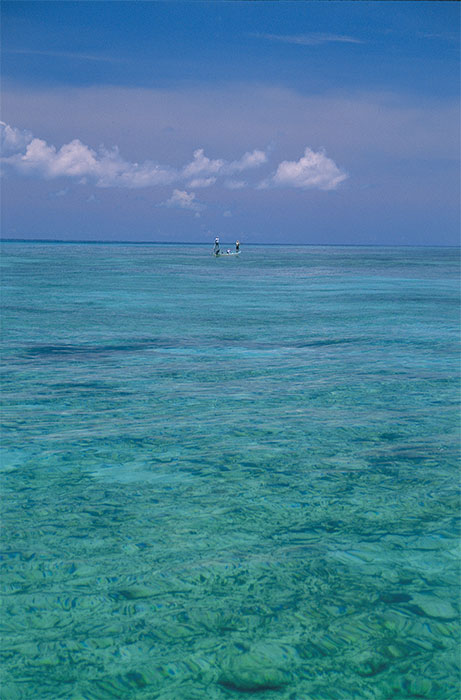 If the word “permit” suggests to you a piece of paper you qualified for in your teenage years before the DMV allowed you to take a test for your driving license, this report won’t have much interest for you. However, if you’ve ever cast a fly to “permit”, you will most likely find this very interesting reading.

The last week of August saw us complete a seven night, six day trip to attempt to verify the guide rumors that have been floating around for the last few years. Those rumors alluded to great numbers of permit residing in the waters surrounding the cays extending sixty miles south of Belize City. What we confirmed is that there are staggering numbers of permit in this area. We also confirmed (at least for us) that catching releasing permit is the most challenging endeavor in the realm of flyfishing.

It's just you, your personal friends or family, your crew and the entire 185 mile coastline of Belize. No one else shares the experience with you. It's a great opportunity to spend time with people you enjoy. It's a pristine environment that can provide the intensity of "world class" fishing or the opportunity to relax and melt into the tropical environment. Re-adjusting to the normal pace of life is a real shock after a mothership trip. A Belizean cruise puts you in a space you don't have to share. So many of the great destinations in the world are crowded and have a commercial environment. The only commercial decision will be how much to leave as a tip for your crew at the end of the week. This is a very personal experience with you in control and great fishing opportunities - those are the reasons many return every year!